What exactly is a Learning  Commons?

A library  “Learning Commons” is basically a space where student learning takes place in a
variety of ways.  Similar to a traditional library, a Learning Commons is still the place where the books and other print resources are kept and circulated but it is also, importantly, a vibrant place where students can collaborate, learn and create using a variety of technology. It is a space where students not only have access to an even wider range of resources but also have  the ability to learn and work both independently and socially. Unlike a more traditional library where the books and shelving units take up most of the room in the library and silence is encouraged by the librarian, a Learning Commons is ultimately a more flexible, varied, and student-centered environment.

Our Journey to Becoming a Learning Commons

On April 17th 2013 we were overjoyed to receive an email that Panorama Ridge Library
had been chosen to be a part of the Secondary Learning Commons Initiative! This was indeed exciting news for several reasons. Not only would we be working with other librarians around the Surrey  School  District towards creating a more collaborative, creative and flexible library space, but we would also receive a grant that would allow us to buy a cart of iPads for students to use in the library.  Change in the library was definitely on the horizon! 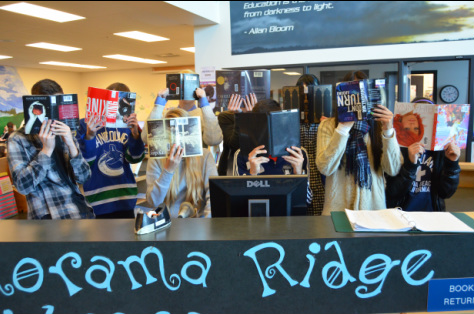 Turning the Traditional Upside Down!
Looking back over the last few months, I can say that our journey towards becoming a Learning Commons really started with a change of attitude. Although our library was already a more progressive environment with plenty of table space for collaboration and equipped with 30 desktop computers, I came to realize that some of the traditional notions of what a library should look like were still deeply entrenched in my  mind. For example as I allowed learning became more interactive and social, I had to remind myself that a little more noise in the library at times was okay. I also dropped my strict 4 to a table rule and started allowing students more flexibility to move tables around in the library so that they could to work in larger groups to complete class assignments and projects.

Secondly, because I strongly believe that student-centered learning is a core component of the Learning Commons Model, I have really tried to focus on fostering greater student ownership over the space in the library. In fact, during the last two weeks in October, a group of Mr. Short’s senior art students painted our first (student-created) mural on the library wall. The creation of the mural was undeniably an enormous success. The mural not only seamlessly blends the themes of nature and literacy but it also contains hidden objects such as unicorn and a dragon which give the mural a magical “Where’s Waldo” appeal. Ultimately our beautiful new mural has been admired by students, staff and guests to our school and has inspired even more library décor ideas that will be implemented in the upcoming months. Furthermore student involvement in library promotion has also increased over the past few months.  Last spring, as part of a literacy campaign, students at our school created over 170 “book tweets” that were displayed all around the library to promote our book collection. My Library Science students and I have also worked together to completely re-vamp our website. 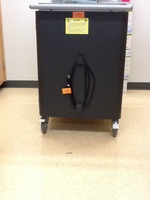 The iPads have arrived!
Finally, as part of the Learning Commons Initiative we also received a generous grant which we used to buy a cart of iPads for the library. Currently we are thrilled to be working closely with IMS and Education Services to pilot a new system to make the iPads more secure and user-friendly for both students and teachers.

Overall our journey to becoming a Learning Commons has been exciting, rewarding and challenging at times, but I truly believe the best is yet to come.